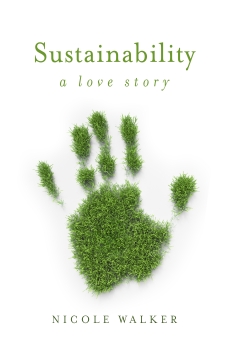 On Earth Day, I was invited to the main downtown library to talk with the book forum Plotting the Plateau. I wasn’t sure what I was heading into and, I guess, some of the people there weren’t either. It turned out to be mainly a book club who had read Sustainability: A Love Story. We went around the table introducing ourselves and giving first impressions of the book. A woman said, “the back of the book doesn’t really match the content of the book,” which I worry is the death knell of a book. Someone else asked, “what does sustainability have to do with tacos?” Fortunately, most of the readers came to the taco’s rescue. Some said the book was stream of conscious, which always concerns me, but then she said she liked it. She also said it was, “very white girl” unlike my column in the paper which, she said, if it didn’t have my picture, said they sounded like came from the Nation—the Navajo Nation’s concerns are the concerns I express in the letters—which made my happy about the column and, again, worried about the book.

Some people say books are author’s babies but they are more like author’s five year olds. They might seem fit for society, but then you take them to dinner and they pick their buggers and eat them at the table. Without fork or knife.

No one likes people to say anything but flattering things about your kids. Or your books. But I’m pretty strong. I can take the stream of consciousness and the what do tacos have to do with sustainability questions just like I can take the questions that the soccer coach asked as he yelled “Max, Max” to my son and he just stared out into the distance, the coach turning to me and my husband Erik, asking, “Does Max go by a different name at home?” No. He stares off into space at home too.

Some people like the book. Some people find it weird. I’m OK with that because Sustainability: A Love Story, with its title meant ironically, has been a good conversation starter. Like all conversations about sustainability, we began with plastic straws. Everyone chimes in on their practice of straw removal from their lives. I make fun of Dutch Bros and the idling cars as customers wait for the fancy drinks in plastic cups with plastic straws. One woman reminds us that some people who are differently abled need straws. We all nod and think of great straws made of metal or paper or avocado pits like the kind served at Uptown Pubhouse. We talk about the paper towel part of my book which is everyone’s favorite and reminds me to write more about shopping trips and my personal troubles with Sam’s Club and my husband’s dream of a cleaner painting job. We talk about using cloths to clean up cat vomit instead of paper towels and how we might want to buy recycled paper towels because then we should create a market for the full cycle of recycling.

This is part of what I wanted Sustainability to do. To let us bond over the frustrations of trying to be good. We talked about the Perfect being the Enemy of the Good. I explained my cap and trade model. Maybe you’re good at collecting water and not so good about eating hamburgers once in a while. But, on the whole, one for one, you’re doing all right. If you never drive, perhaps you can feel OK to takes baths instead of showers. If you buy all your clothes at a thrift store, maybe you can order an extra large fancy drink decked out in plastic from Dutch Bros once in awhile.

But, just as in the book, we in the book club were frustrated by the details of what it meant to be sustainable. While my main philosophy in life is to pay attention to the details, I mean that to be pay attention and be in awe. I don’t mean stress over the pros and cons of plastic straws. I mean, be conscious of them. Pay attention to them, reject the straw if it matters to you, but also note the weird little caterpillar making his way between the cracks of the sidewalk. I mean look at the three weird pistils poking from within the tulip. I mean, stick your nose deep into the flower and then motion me over, either by hand gesture or by book, and say, stick your nose in this too.

I am full of gratitude for Coreen from the Flagstaff Arboretum who chose the book for the book club and who read through the tacos to get to the bigger point. She said it so well, I wish I had recorded it, but essentially she said that the point of the book isn’t so much about which this and that to do to be sustainable but that without community and a collective effort, individual this and that change can only make so much difference. The last chapter of Sustainability is about imagining a future of shared experience. Shared tacos and shared blossom sniffing and shared concern about papertowels. And thus, Sustainability the book did what I hoped it would do—start a conversation and make a new community. I count the people I met through Plotting the Plateau as at least acquaintances now and maybe even friends.

There are a lot of buzzwords in our daily parlance. Network. Web. Interconnect. But I believe that’s the beginning spot. I’m grateful to my former MFA student Jamie Paul who invited me to talk at her library. Another example of one connection making 3 more and then 12. Enough to make a small net to start raising high the, if not perfect, the good.

The conversation changed after Coreen noted how the book isn’t so much about saying ‘no’ as it is about saying ‘yes.’ It’s about forming coalitions and cooperatives to help make legislative change. To make corporations make fossil-fuel free choices. One of the people in the group told us about an incinerator that swallowed its own smoke but complained that local municipalities weren’t interested in the US even though many had been sold in Europe. It’s that kind of pressure we need. Boise has a program of turning its plastic into fuel. That’s more likely than convincing people to stop buying fancy drinks in plastic cups from Dutch Bros.

Humans are bad about saying no to themselves. As the eponymous essay Sustainability: A Love Story goes, “Sustainability is easy enough to define. Keeping going what is already going seems like a good idea. Isis good. It denotes being. Aliveness. Fact. Tucked inside the word are other good words: sustenance, maintain, able — something we are doing and can keep doing. Present tense. Simple. We sustain. We are sustaining. We will keep life as we’ve come to know it keep on keeping on. The word sustainable attaches to environmentalism, but sustainable is a reasonable, not-preachy kind of environmentalism. We resist the word environmentalism. It suggests not is but no. Stop driving. Stop heating this house. Stop powering this computer with ill-gotten electricity. But if humans are bad at one thing fundamentally, it is stopping. Animals. Animate. Going. Going is something humans do well. When I think of sustainability, I think of the possibility of cars. High-gas mileage. Electric-powered. Even solar-powered. But the solar-powered car. It only seats one. It goes slow. It’s hard to drive on rainy days. I don’t want no. I want forward.”

By the end of Sustainability, I realized more is better, not less. I want blueberries and hydropowered trains. I want mushrooms and microbes that eat plastic. I want solar panel on every car and house and a garden on every shop’s roof. I want water collection at my kids’ schools and wind farms in my backyard. I want carbon sucking mushroom and carbon eating whales. I want, just like the new friends at the library want, some more friends, some more rain, some extra sun (because the whole project is a paradoxical one, we want both rain and sun). I want the book to grow up to be a good big kid, a radical adolescent, a kind adult. I still have hope for the book and the planet. And I’m grateful to book clubs and book readers.